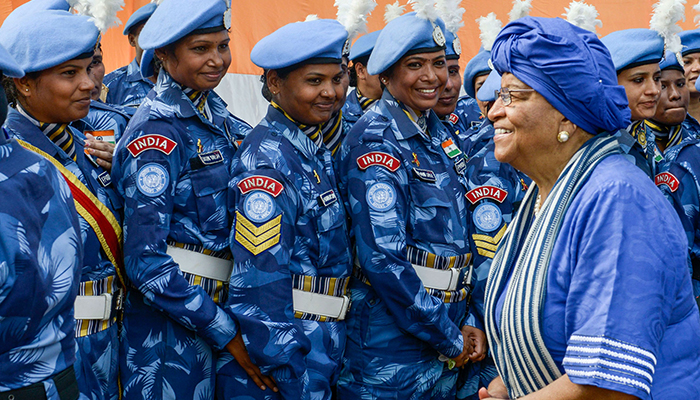 Earlier this month, on the 21st, women in America organised a protest march in Washington D.C as a display of strength around issues pertaining to women’s rights. This movement became global and women across the world marched in solidarity. It was organised as a grassroots movement that aimed to send a bold message to the Government in power. In India, too, women have always fought for their rights and risen above. More and more women continue to break stereotypes across fields – sports, science, politics, arts – and serve as role models to children every day.
We at Desh Apnayen celebrate strength at all levels – from the surrounds of our communities to the strongest echelons of our defence forces. There is a subtle but important difference between strength and power. Strength could merely be brute force, but power must be earned with trust and responsibility. In this blog, our Republic Day special, we feature brave and powerful women police officers who are breaking stereotypes and standing up for solidarity in their communities by not being afraid to do the right thing.

She is the first woman officer to be posted in Bastar, Chattisgarh. It’s a difficult, Naxal-hit region. She is just 27 and she is already inspiring girls from the tribal villages to take up education and join civil services.
When she is not policing, she helps tribal students with their studies in her camp. She specifically requested for this posting and wasn’t just placed there. Kudos to her.

Post-independence, there has been no female police officer who has been in charge of any chief minister’s security. It is truly sad that in 70 full years, the police force did not believe in a woman enough to put a CM’s safety in their hands.
But that changed with Ms Sankaran. She took charge efficiently and fanned locations for security threats, mapped safe roads for convoys and even provided close proximity security for Assam’s ex-CM Sarbananda Sonowal.
That’s quite an example to set! Thank you for making our girls aim higher and dream bigger.

From 2007 to 2016, an all women police force from India was on a peacekeeping mission in Liberia. The 125-strong contingent helped the country immensely during time of civil unrest. In February 2016 they handed over their responsibilities to the local authorities. They did their job so well that the Liberian president did not want them to leave the country.They managed crime, reduced violence towards women and most importantly, built confidence among the people in Liberia.

Manzil Saini is an excellent athlete and a gold medallist from Delhi School Of Economics. She punished undisciplined constables, busted a multi-crore kidney racket and even took on Samajwadi Party workers in Etawah for using tinted windows on their vehicles.

She’s known to be as one of the smartest cops around. She has been an officer in the National Investigative Agency and at the CID. She is no-nonsense and believes that all are equal before the law. She also has zero tolerance for any kind of crime, as the poor politician now knows.
To know more about these women and more, please look at the original source of this article on Story Pick.
It gives us immense pleasure to see these examples of good citizenship helping us govern this country. This Republic Day, the Crown Prince of Abu Dhabi, Crown Prince Mohammed bin Zayed Al Nahyan will be the Chief Guest. Let’s get in the spirit of the day! Watch these beautiful videos and pledge to serve our country as better citizens each year. Jai Hind!
The first Republic Day parade ever held:

A beautiful musical rendition of the National Anthem some of our most beloved artists: