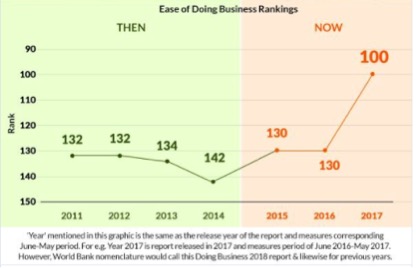 India has often been touted as a tough place in which to do and grow a business worldwide. In spite of the attractiveness of our economy and increasing spending power, the World Bank ranked us a poor 132 in the Ease of Doing Business rankings. Not anymore.
According to the latest global ‘Ease of Business’ rankings, which were released in October 2017, India climbed 30 places to rank 100th out of 190. According to the World Bank, the improvement in the ranking has come on the back of “sustained business reforms” over the last four years.
The ease of doing business ranking compares economies with one another via a special, trademark scoring system that includes parameters such as regulatory best practices, how much the regulatory environment for local entrepreneurs in an economy has changed relative to that in other economies, technological innovation, etc.
Here is how India has performed on these rankings since the last 6 years:

The two new groundbreaking economic reforms that were introduced recently – demonetization and GST – would affect only reflect in next year’s rankings.
According to Mr Junaid Ahmed, Country Director of the World Bank in India, what works at our advantage is that “The government has introduced a user-feedback system this year in particular and using the feedback system they have been able to adapt and adjust wherever they saw certain bottlenecks (plays to this achievement). All these have slowly begun to get reflected in the indicators that we use to measure ease of doing business.”
What’s more, a global city-wide Ease of Doing Business ranking is expected to come out at the end of 2018, and Indian cities are expected to be featured in good light.
For us citizens, there is quite a lot to celebrate. We need to just keep on going and give reforms and initiatives time to show their worth and performance. That is the first lesson the World Bank has learnt from other countries. So much is happening for our country’s progress across all spheres of international aid and support. Let us take a moment to understand this better so that our faith in our progress is restored.